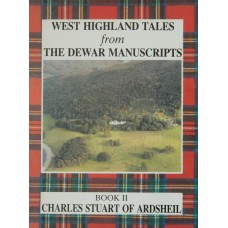 This second book from the "Dewar Manuscripts"  recounts the story of Charles Stuart, a brilliant swordsman, who commanded the Appin Regiment of the Jacobite army in the 1745 rebellion. This is the story of his triumph and defeat, and of persecutions he suffered - and overcame - thereafter.

What are the Dewar Manuscripts?

About the middle of the nineteenth century George Douglas, the 8th Duke of Arguyll, chose John Dewar , a Gaelic-speaking wooman from Rosneath, to travel the Highlands and Islands in search of folk takes which, because they had hitherto been passed down by word of mouth, might one day be lost to posterity unless they could be preserved in written form.

Dewar did his work well, collecting Highland stories as fast as he could take them down, covering both the islands and the mainland, visiting poorhouse and hospital, clachan and town, gathering the largest collection of Gaelic folk takes that had ever been known.  When finished, his work ran to about 750,000 words, contained in five volumes, all handwritten in a beautiful script which was a tribute to the Highland education of the period.

Such are the famous Dewar Manuscripts, of which, following the English translation by Hector MacLean of Islay, Volume 1 was published by the former MacLellan Company in 1963, and copies of that original printing will finally become collectors' pieces in the hands of those who can appreciate their unique contribution to our knowledge of a culture and a way of life that are already in the past.

But in response to demand for a wider proliferation of that knowledge in more accessible forms, the work has begun of issuing extracts from the Dewar folk tales, each a mini-volume covering a geographical area, a particular clan family or a dramatic episode in time.

Ironically the tales that are best remembered are those that tell of repression and suffering, as well as doughty exploit and high adventure; all these were brought together in that traumatic period of Highland history when, for the last time, the clans matched their wild courage and their claymores against the disciplined skills and firepower of a professional army.

The 'Forty-five rebellion!   The story of Charles Stuart of Ardscheil is a story of that rebellion and its tragic aftermath.  It begins with the landing of Prince Charlie at Moidart, Invernesshire in July of 1745.