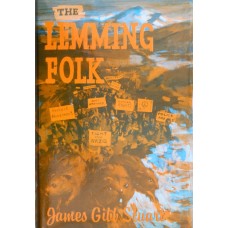 The Lemming Folk are those who, consciously or not, work for the overthrow of the social system, capital intensive and enterprising, whcih sustains our standards of wealth in the West. It is the author's thesis that we have fallen prey in the past century to a  false, collectivised philosophy, - the Fabian ethic, - a doctrine of defeatism and coercion that offers no safeguards for the preservation of individual freedoms, eroding our liberal civilisation to the point where it could be no match for the militant ideologies of Eastern Europe and Asia.

Here is a witty and entertaining exposure of the lemming breed.  All the known varieties of blinkered and collared species are described with the loving detail of a real connoisseur - the myopic "Britannicus",  head down in the sinking sands of social problems; "Lemmus Moderatus", munching contentedly on his diet of medi mock-reality; "Moralis", champion of the UK morality; and so on.

Throughout this global analysis of lemming-like attitudes, a cumulative case is built up that points to an extraordinary Conspiracy at work that can even place the Soviets in the role of hatchet men for an international mafia which the author calls "The Company", who use terror and revolution and possibly inflation as instruments of policy.  Gibb Stuart sees the finance mechanism as the source of this world power complex, and delves in the byeways of reformist literature for solutions which the politicos have thus far neglected.

Latterly,he points to the bitter anomaly of high prosperity amongst the traffickers in money, whilst manufactures of real commodities are going to the wall.

Recently (2013) recommended by Brian Gerrish from UK Column as a book still as relevant today as when it was written.