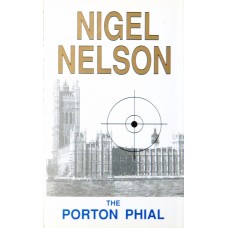 This is a political thriller, by the Political Editor of the Sunday People: a plot to kill top politicians, involving chemical weapons and CIA disinformation, which drew complaints from MPs afraid someone might copy it....

In a little Belgian tourist town the leaders of Europe's terror movements gather secretly to plot an audacious campaign of death on mainland Britain.

In Washington, top CIA disinformation expert Charlie Keynon is briefed on a plan hatched in the White House to manipulate and discredit Britain's anarchists and keep the Tories in power.

In London, one-time ace reporter Marcus Calmett, teetering on the brink of alcoholism, is handed the biggest assignment of his life and a last chance to revive his flagging career.

Against a background of events which actually happened, Nigel Nelson's fast-paced and sparkling narrative leads us through the secret world of intelligence and into the most hallowed corridors of power.  He also provides a unique insight into the mids of the ruthless men of violence who carry out the ghastly crimes we are all, sadly too familiar with.

The Phorton Phial combines the most incredible terrorist plot of the century ..... with a most poignant and human love story.