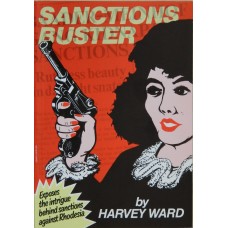 This is the incredible story of how the Baader-Meinhof terrorist gang was hired by a United Nations sub-committee to assassinate Rhodesian sanction breakers in Europe.

As a journalist and former Director-General of the Rhodesian Broadcasting Corporation (Radio and Television) as well as part of the regime's psychological warfare campaign, Harvey Ward knew what was going on behind the scenes and how the operations worked.

In the end, he says, sanctions-busting developed into a new and highly developed ball game of espionage and counter-espionage.  Spies, intrigues and ruthless men and women on-the-make got into the act from America, Britain, West Germany, France, Spain, Portugal, East Germany, Czechoslovakia, Russia, African states and the United Nations.

Harvey Ward's book gives an account of what transpired behind the pitched battles of the bush war and in the corridors of power in Central and Southern Africa.  He has interwoven fiction in the story to protect the identity - and the lives - of many who acted out a bizarre chapter of history of international politics and power-play.  They were part of a vast underground network of sanctions-busting operations.