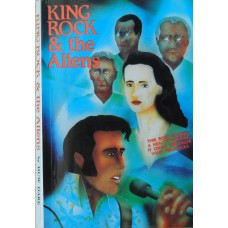 What really happened to Elvis Presley, the rock singer who became a legend in his lifetime?

There are many stories, but strangest of all is the persisting rumour that at the height of his fame and fortune he was confronted by a powerful vested interest, which, being Elvis, he decided to resist.

A decade or so further on, a new rock superstar has arisen. His name is Anton Blake. He is British, with a moated Elizabethan manor house in Suffolk, and a developing lifestyle to suit. Like Elvis, he has his ideals and his principles. But it is only after he becomes involved with the Aliens that he faces the great challenge of his life. Blake is not Elvis Presley. The similarities are superficial. Yet as you see him locked in a struggle with Titans, you may be tempted to wonder, "Is this how it was with Elvis too?"