Information
Home » Historical Fiction and (Auto)-Biography » The Universal Self: A Study of Paul Valéry

The Universal Self: A Study of Paul Valéry 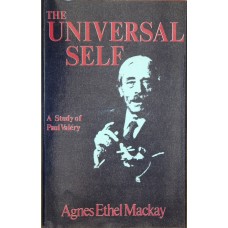 Paul Valéry was one of the most brilliant and subtle thinkers of his time.  His work sums up the traditions of classical French poetry and carries it to its highest perfection: the fine flower of an intellectual civilisation.

In this volume Miss Mackay examines Valéry's achievement, both as poet and creative thinker, placing him in the environment of literary life in Paris; tracing the development of his thought, from his early friendship with Mallarmé to the years when his genius was widely acknowledged.  She shows how his interest in scientific techniques led him to evolve a system of thought, analogous to the methods of higher mathematics, to elucidate the workings of the mind, from which arose his conception of the Pure Self - the essential theme of his poetry.