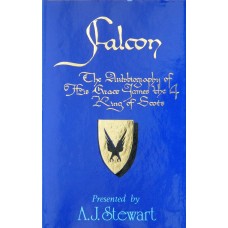 The "autobiography" of King James IV, the most able monarch of the Stewart dynasty, during whose reign Scotland achieved a prosperity, status and stability not since equalled. This is his story, told through A.J. Stewart, a 20th century English playwright.

From childhood until his death at forthy on Flodden Field in 1513 James the 4th, King of Scots, is revealed in these personal memoirs as sharply conscious that his own and Scotland's destiny are fatally bound together.  A sense of special purpose can be seen to guide him - in his laborious studies as a boy, in his misery at his beloved father's disgrace and abdication, and, on his succession, both in his defiance of Scotland's old enemy across the border, 'King of England', and in his ceaseless striving to unify and bring his country to a condition of prosperity, unkown before, possibly unequalled since.

This remarkable work - the circumstances of authorship are extraordinary - exemplifies the young king's humanity as well as his policies: his family life and intimate friends, his personal magnetism, his constant journeys through the land and comfortless stays in castles and palaces.  Not least among its extraordinary qualities is the strongly visual impression it leaves with the reader of people, events and surroundings.

The reader sees, as it were, what the king sees, breathes the air both sweet and foul that filled James's nostrils five centuries ago, and meets the men and women who throng about him: finally the reader marches with him under the falcon device into the appalling turmoil of Flodden where, beset by English swords and beaten to the ground, James catches his last glimpse of daylight through the vizor of his helmet before death overwhelms him.