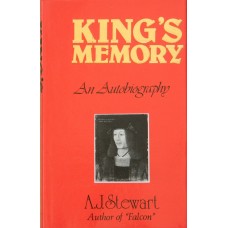 The auto-biography of A J Stewart and her fascinating voyage of discovery of the link between her inexplicable memories and the personal memories of James IV of Scotland.

A J Stewart, author of "Falcon: The Auto-biography of His Grace, James the Four, King of Scots",  here gives us her own autobiography; her childhood and upbringing in Lancashire, her service with the ATS immediately after the war, the period as a successful dramatist and TV script writer in London during the 50s - finally the abandonment of her career to return to Edinburgh and her gradual uncovering of her identity as james IV of Scots.

"it took me all of thirty-eight years to discover that my own problem and the Scots defeat on Branxton Moor were one and the same phenomenon.  By that time I was so confused with the conflict of trying to reconcile my two identities that I lived with the truth apparent for quite some while before I perceived it"

This book is the story of that conflict - and it is a deeply honest account.