Lamp in the Night Wind 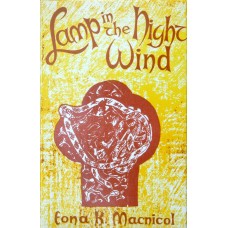 An account of the coming of St Columba to Scotland in 563 AD.  Based upon careful research in the period, it embraces the most recent discoveries regarding the Picts and their language, and the position of the Christian Church at this time .  It is however an  imaginative treatment, with vivid appeal for every kind of reader.

The Abbot Colum with a small following of monks leaves his native Eire for Alba (or "Scotland") - rather, in the first instance, to that part of it called Dalriada, which has been colonised by kinsfolk of his own.

They eventually land on the Island (now called Iona) and settle there, hoping to get the consent of Connal the Dalriadan king.  They find, however, that Dalriada is in sorer straits than they had imagined, having been utterly defeated by the Cruithnians (Pictish people from Alba) under the strong High King Brude mac Maelchon.  Colum realises that he must make the journey to Brude, at Inverness, to get his ratification as Connal's overlord of the granting of the right to the Island: he hopes also to obtain better terms for Dalriada.

Two abbot friends frome Eire joining him, he makes the journey through the Great Glen. Warned that Brude is a staunch pagan and under the domination of the formidable Archdruid Broichan who is also his fosterfather, he nevertheless finds Brude secretly drawn to Christianity with which he has had some previous contact.

The story follows the hard duel between Colum and the Archdruid for the soul of the High King, during which he has a foretaste of the tremendous spiritual influence of his Island community.